Like most of us, I like to take vacations with family and friends – and I push for vacations where I can get away from humanity. I’m a country boy at heart and am forced to live in the city (OK, at least in suburbia), so spending my free time in close proximity to large numbers of my fellow man pegs my fun meter at somewhere near zero.

You may now have guessed, my preferred photo style is landscapes. 🙂

In October 2014 we vacationed in the American Southwest and one of the places we visited was Valley of Fire State Park just a short drive northeast of Las Vegas, Nevada. The park is an impressive bit of nature’s display and has a range of colorful formations throughout the park – not to mention petroglyphs from some of North America’s earliest human occupants. Apparently, even they could not resist plastering their surroundings with graffiti…

We had spent the day driving to different areas of the park, stopping the car, and hiking several miles of trails. Toward the end of the day, with the sun crossing over to the Golden Hour, we parked near the eastern entrance to the park with the plan to hike up the trail to higher elevation and see one of the more interesting formations in the park.

I was waiting a few yards down the trail waiting for my party to catch up after visiting the, uh, “facilities” when I caught a flash of light out of the corner of my eye. It turned out I was not standing next to a solid block of sandstone as I originally thought, but rather I was standing next to a hollowed out section of the rock and the sun had moved far enough down that it was now shining through.

Any of us who have been around landscape photography for any more than a couple evening photos knows that these lighting scenarios last mere moments. Luckily, I had my camera powered up and ready so I quickly pulled it up, composed my shot, and captured the moment.

I ended up with a photo that I find interesting. Maybe you do, too.  🙂 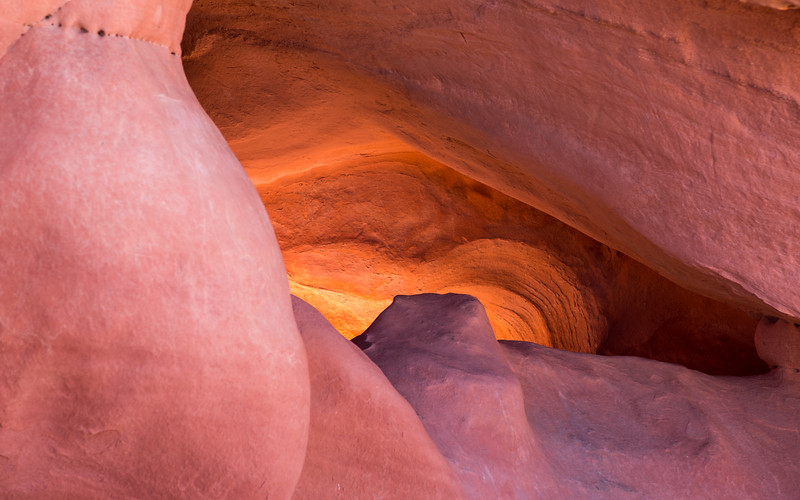